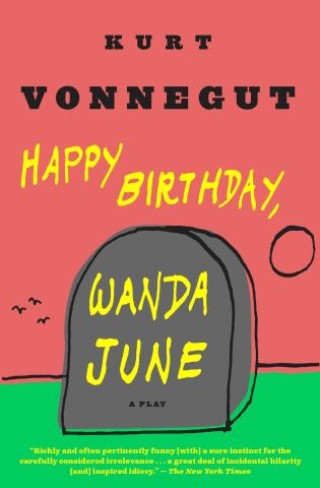 “Richly and often pertinently funny [with] a sure instinct for the carefully considered irrelevance . . . a great deal of incidental hilarity [and] inspired idiocy.”—The New York Times

Happy Birthday Wanda June was Kurt Vonnegut’s first play, which premiered in New York in 1970 and was then adapted into a film in 1971. It is a darkly humorous and searing examination of the excesses of capitalism, patriotism, toxic masculinity, and American culture in the post-Vietnam War era. Featuring behind-the-scenes photographs from the original stage production, this play captures Vonnegut’s brilliantly distinct perspective unlike we have ever seen it before.

Kurt Vonnegut: Kurt Vonnegut’s black humor, satiric voice, and incomparable imagination first captured America’s attention in The Sirens of Titan in 1959 and established him as a “true artist” (The New York Times) with Cat’s Cradle in 1963. He was, as Graham Greene declared, “one of the best living American writers.” Mr. Vonnegut passed away in April 2007.