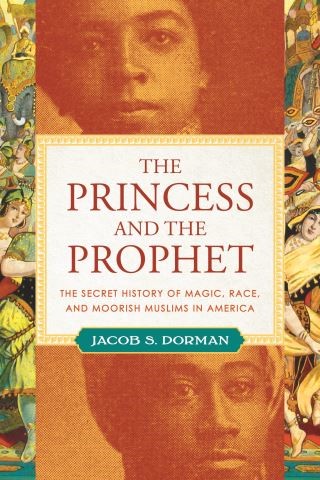 The Princess and the Prophet

The Secret History of Magic, Race, and Moorish Muslims in America

Delving into new archives and uncovering fascinating biographical narratives, secret rituals, and hidden identities, historian Jacob Dorman explains why thousands of Americans were enthralled by the Islamic Orient, and why some came to see Islam as a global antiracist movement uniquely suited to people of African descent in an era of European imperialism, Jim Crow segregation, and officially sanctioned racism.

The Princess and the Prophet tells the story of the Black Broadway performer who, among the world of Arabian acrobats and equestrians, Muslim fakirs, and Wild West shows, discovered in Islam a greater measure of freedom and dignity, and a rebuttal to the racism and parochialism of white America. Overturning the received wisdom that the prophet was born on the East Coast, Dorman has discovered that Noble Drew Ali was born Walter Brister in Kentucky. With the help of his wife, a former lion tamer and “Hindoo” magician herself, Brister renamed himself Prophet Noble Drew Ali and founded the predecessor of the Nation of Islam, the Moorish Science Temple of America, in the 1920s.

With an array of profitable businesses, the “Moors” built a nationwide following of thousands of dues-paying members, swung Chicago elections, and embedded themselves in Chicago’s dominant Republican political machine at the height of Prohibition racketeering, only to see their sect descend into infighting in 1929 that likely claimed the prophet’s life. This fascinating untold story reveals that cultures grow as much from imagination as inheritance, and that breaking down the artificial silos around various racial and religious cultures helps to understand not only America’s hidden past but also its polycultural present.

Jacob S. Dorman: Jacob S. Dorman is a professor of History and Core Humanities at the University of Nevada, Reno. He is the author of the CHOICE Outstanding Academic Title Chosen People: The Rise of American Black Israelite Religions (Oxford University Press, 2013), which won numerous book prizes. Dorman has been awarded fellowships by the National Endowment for the Humanities, the American Council of Learned Societies, the Andrew W. Mellon Foundation, Columbia University, the University of Chicago, and many others.