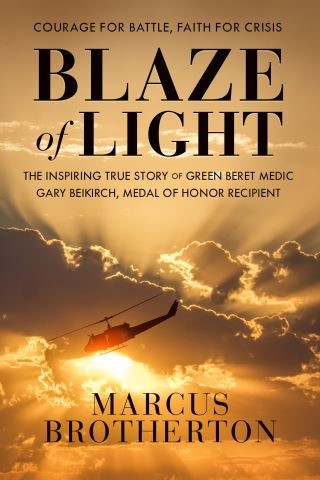 For fans of Unbroken and Hacksaw Ridge comes the powerful true story of a Medal of Honor recipient who faced more than his fair share of battles—and overcame them through perseverance and faith.

“What Gary Beikirch did to receive his medal is unforgettable—and the story of what he overcame afterward is as big and moving as they come.”—Gary Sinise

After dawn the siege began. It was April 1, 1970, and Army Green Beret medic Gary Beikirch knew the odds were stacked against their survival. Some 10,000 enemy soldiers sought to obliterate the twelve American Special Forces troops and 400 indigenous fighters who stood fast to defend 2,300 women and children inside the village of Dak Seang. For his valor and selflessness during the ruthless siege, Beikirch would be awarded a Medal of Honor, the nation’s highest and most prestigious military decoration.

But Gary returned home wounded in body, mind, and soul. To find himself again, Gary retreated to a cave in the mountains of New England, where a redemptive encounter with God allowed Gary to find peace.

New York Times best-selling author Marcus Brotherton chronicles the incredible true story of a person who changed from lost to found. Gripping and unforgettable, and written with a rich and vivid narrative voice, Blaze of Light will inspire you to answer hurt with ingenuity, to reach for faith, and to find clarity and peace within any season of storm.

Marcus Brotherton: Marcus Brotherton is the New York Times best-selling author or coauthor of more than twenty-five books, including Tough as They Come with SSG Travis Mills and We Who Are Alive and Remain: Untold Stories from the Band of Brothers. He has won the Christopher Award for literature that “affirms the highest values of the human spirit.”