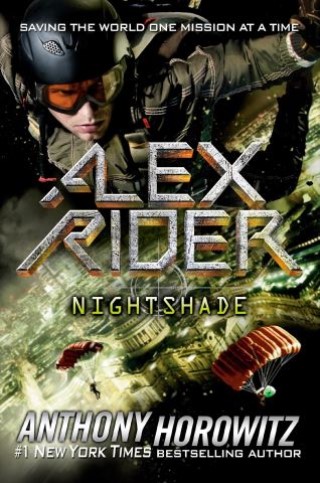 From internationally bestselling author Anthony Horowitz comes the twelfth thrilling installment of the Alex Rider series! Follow the world's greatest teen spy as he sets off to Gibraltar after the death of Scorpia, and enters into a battle against a new criminal organization: Nightshade.

Following the shocking events of Never Say Die, Alex Rider's world has changed: his biggest enemy, the evil organization Scorpia, has been destroyed. Alex is hoping his life can finally go back to normal, that he can go to school and spend time with his friends--but very quickly everything changes. A new and dangerous criminal organization--Nightshade--is rising.

When Alex discovers they've planned a mysterious attack on London, he will stop at nothing to take them down. But protecting his home city means facing off a ruthless new enemy and putting his life at stake, again. And this time, there's no one to save him if he makes a mistake.

The #1 New York Times and internationally bestselling Alex Rider series is back with a vengeance in this edge-of-your-seat adventure. Perfect for fans of James Bond and Jason Bourne!

Anthony Horowitz: Anthony Horowitz is perhaps the busiest writer in England. He has been writing since the age of eight, and professionally since the age of twenty. He writes in a comfortable shed in his garden for up to ten hours per day. In addition to the highly successful Alex Rider ongoing series of books, he has also written episodes of several popular TV crime series, including Poirot, Murder in Mind, Midsomer Murders, and Murder Most Horrid. He has written the television series Foyle's War, which aired in the United States, as well as the libretto of a Broadway musical adapted from Dr. Seuss's book, The 5,000 Fingers of Dr. T. He penned the script for the film The Gathering, which was released in 2003, starring Christina Ricci. Horowitz has also written the Diamond Brothers series.