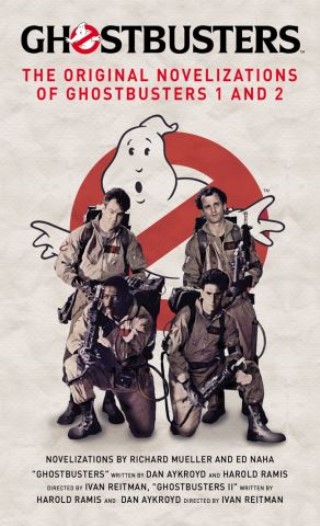 For the first time in a beautiful new edition, this omnibus will collect together the original official novelizations of both Ghostbusters 1 and 2.

Relive the classic Ghostbusters stories with the original movie novelizations reprinted for the first time since 1980s.

When Dr. Peter Venkman and his Columbia University colleagues are kicked out of their prestigious academic posts, they start a private practice as professional ghost-catchers. Although things do not start auspiciously for the three parascientists, their television advertisements finally pay off when beautiful Dana Barrett contracts them. It seems her apartment has become the entryway for ghastly ghosts and goofy ghouls hellbent on terrorising New York City. Soon they're not just going to her rescue, but trying to rid the whole city of the slimy creatures.

After waging a war on slime that cost New York City millions, the Ghostbusters find themselves out of business until an ancient tyrant, preparing a return to the Earthly domain through his portrait at the Manhattan Museum of Modern Art, sets his sights on Dana Barrett's baby as the new home for his wicked soul!

Richard Mueller: Richard Mueller served in the U.S. Coast Guard before moving to Hollywood to work as a writer, first in science fiction and then television and film. He also runs the "best open mic show" in L.A."

Ed Naha is an American science fiction and mystery writer and producer. He worked on scripts for Honey, I Shrunk the Kids and Dolls. His novelizations include Ghostbusters 2, and both Robocop films, and he also wrote The Making of Dune.