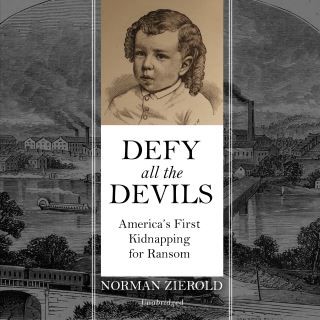 Defy All the Devils

The “fascinating, hair-raising, suspenseful” account of a little boy abducted in broad daylight and the desperate manhunt to find him (New York Times Book Review)

On July 1, 1874, four-year-old Charley Ross and his older brother, Walter, were playing in front of their stately Philadelphia home when a horse-drawn carriage pulled up with two men who offered candy and fireworks if the boys would ride with them.

Hours later, Walter came back, stating that they had ridden through the city until the men abandoned him in the street but kept Charley. Soon after, their father, Christian K. Ross, received a demand for $20,000 in return for his son.

Ross went to the police for help—and before long, the case became a national phenomenon. A popular song pleaded for the boy’s safe return. The Philadelphia police searched every home in the city, and thousands of people falsely reported that they had seen Charley or knew his whereabouts. Meanwhile, the kidnappers’ ransom letters were becoming more threatening and bizarre. The press, eager to fan the flames of hysteria, printed wholly fabricated stories and even accused Christian Ross of orchestrating the whole thing in order to hide the fact that Charley was illegitimate.

And then the men who took Charley went silent …

This is the chilling true story of a crime that transfixed a still-growing America, the unlikely series of events that produced the case’s most tantalizing clues, and the tragic twist of fate that plunged the Ross family back into darkness and haunted them for decades to come.