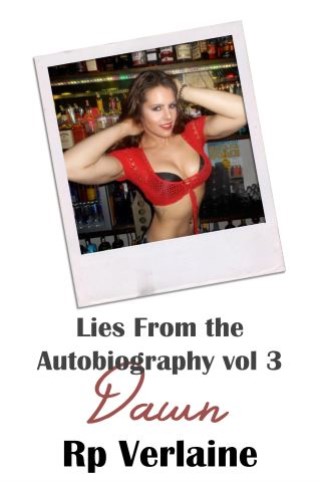 Lies From The Autobiography vol 3 Dawn

In short poems and photographs, Rp Verlaine and New York Model
Dawn-Marie Slocum tell a love story that begins in a bar and is navigated in bedrooms and city streets. Elements of crime noir and science fiction also appear as the two lovers are stalked by a gang with laser guns called the Electric Romeos. Rp Verlaine uses lean economical lines to tell what is basically a love story with edge and humor: She says men she's known/have left deep scars/I tell her I'll be gentle/she laughs and tells me/ that's not what she likes.

Sought by a violent gang and always in danger, the lovers speak in terse sentences , sometimes playful often aloof. Intimate thoughts take an almost interior monologue type of perspective:. Yet, these short terse lines are often amusing as they are self-deprecating The mailman's face/ when I answer the door/ instead of Val topless.

In the end, the lovers find the journey not without its pleasures but difficult to sustain:
.We drive at night/ at speeds to make suicides/ smile one last time. Rp Verlaine's Lies from the autobiography vol 3 Natalie is a poetry book well worth your time.