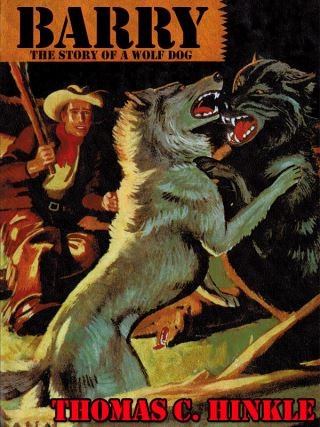 Barry: The Story of a Wolf Dog

Barry was a small gray furry ball, only two weeks old, when he was tossed into the swirling river. It would have been the end of the pup if young Jim Williams and his big black and tan dog, Old Jeff, had not rescued him. From then on Barry was a one-man dog, and that man was Jim.

By the time the dog was full-grown, he weighed a good 150 pounds. With his sharp pointed ears and gray coat Barry was constantly mistaken for a timber wolf —so much so, in fact, that even the longhorns on the range attacked him.

Then came a fierce struggle between the cowhands and a notorious wolf pack, led by Lobo the Black Wolf. Year after year the pack had terrorized and attacked the grazing cattle. It was while tracking them down that Jim shot Barry by mistake. Gun-shy and hurt, the dog took to the timber alone.

But the range riders were to win their battle in an exciting climax as Barry rushed in to save Jim from the maddened Lobo. The fight was a grizzly one—a fight to the finish—as the two animals fought for their lives on the open range in the black of night.