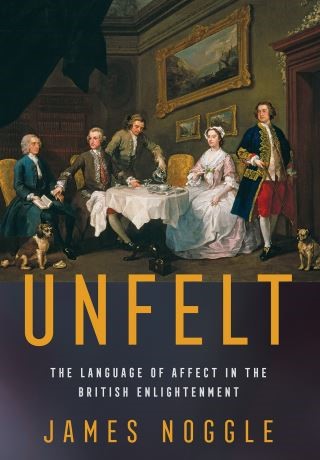 The Language of Affect in the British Enlightenment

Unfelt offers a new account of feeling during the British Enlightenment, finding that the passions and sentiments long considered as preoccupations of the era depend on a potent insensibility, the secret emergence of pronounced emotions that only become apparent with time. Surveying a range of affects including primary sensation, love and self-love, greed, happiness, and patriotic ardor, James Noggle explores literary evocations of imperceptibility and unfeeling that pervade and support the period's understanding of sensibility.

Each of the four sections of Unfelt—on philosophy, the novel, historiography, and political economy—charts the development of these idioms from early in the long eighteenth century to their culmination in the age of sensibility. From Locke to Eliza Haywood, Henry Fielding, and Frances Burney, and from Dudley North to Hume and Adam Smith, Noggle's exploration of the insensible dramatically expands the scope of affect in the period's writing and thought.

Drawing inspiration from contemporary affect theory, Noggle charts how feeling and unfeeling flow and feed back into each other, identifying emotional dynamics at their most elusive and powerful: the potential, the incipient, the emergent, the virtual.