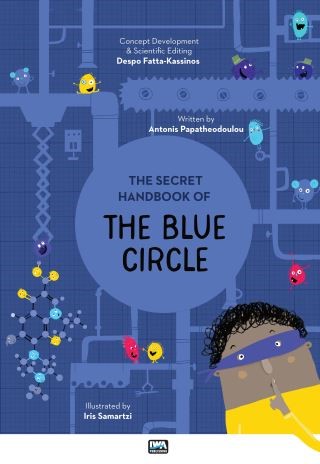 The Secret Handbook of the Blue Circle

Concept Development and Scientific Editing: Despo Fatta-Kassinos The book was inspired by the scientific work carried out by the research group of Nireas International Water Research Center (Nireas-IWRC) at the University of Cyprus in the field of wastewater treatment and reuse. The work is led by Dr. Despo Fatta-Kassinos, who is an Associate Professor at the Department of Civil and Environmental Engineering and Director of Nireas-IWRC. The group worked together with Antonis Papatheodoulou, one of the Greece’s best children’s storytellers, and developed an interesting educational adventure through which children can understand the vital role of water in life. There is increasing recognition of the power of children’s early thinking and learning, as well as a belief that science may be of particular importance in early childhood, contributing not only to the future scientific understanding of children, but also to building important skills and attitudes for learning, establishing high levels of scientific literacy and strengthening scientific inquiry. Educating the young generation and increasing awareness on various aspects of the water cycle and wastewater reuse was the motivation for the development of ‘The Secret Handbook of the Blue Circle’. Six Water Scientists, who are defenders and protectors of the most important substance on the planet (i.e. water), Dr. Tom Atom, Dr. Celia Circle, Dr. Scot Water, Dr. Glow McCrystal, General Claire Clean and Dr. André Antib, are looking for helpers to become new members of their ‘Eternal Blue Circle Society’. The eight Secret Chapters of the book, include among others: knowledge on what water is, its chemical structure and properties, its cycle, its uses and its significance, water scarcity, a historical retrospective of a city's water supply from antiquity to date, the typical treatment processes applied for the production of drinking water, the water pollution caused by traditional pollutants and contaminants of emerging concern, the processes applied in wastewater treatment plants, and the presence of such contaminants in the environment. The mission of the members of the ‘Eternal Blue Circle Society’ is to carefully study contaminants of emerging concern and protect water and nature. Suitable for children of six years and upwards, the book also outlines simple ways in which the children can contribute to the protection of water quantity and quality and raise awareness on the topic themselves.