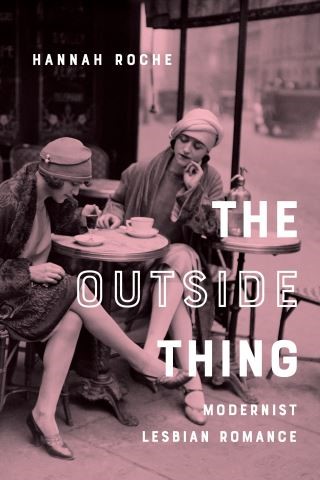 In a lecture delivered before the University of Oxford’s Anglo-French Society in 1936, Gertrude Stein described romance as “the outside thing, that . . . is always a thing to be felt inside.” Hannah Roche takes Stein’s definition as a principle for the reinterpretation of three major modernist lesbian writers, showing how literary and affective romance played a crucial yet overlooked role in the works of Stein, Radclyffe Hall, and Djuna Barnes. The Outside Thing offers original readings of both canonical and peripheral texts, including Stein’s first novel Q.E.D. (Things As They Are), Hall’s Adam’s Breed and The Well of Loneliness, and Barnes’s early writing alongside Nightwood.

Is there an inside space for lesbian writing, or must it always seek refuge elsewhere? Crossing established lines of demarcation between the in and the out, the real and the romantic, and the Victorian and the modernist, The Outside Thing presents romance as a heterosexual plot upon which lesbian writers willfully set up camp. These writers boldly adopted and adapted the romance genre, Roche argues, as a means of staking a queer claim on a heteronormative institution. Refusing to submit or surrender to the “straight” traditions of the romance plot, they turned the rules to their advantage. Drawing upon extensive archival research, The Outside Thing is a significant rethinking of the interconnections between queer writing, lesbian living, and literary modernism.