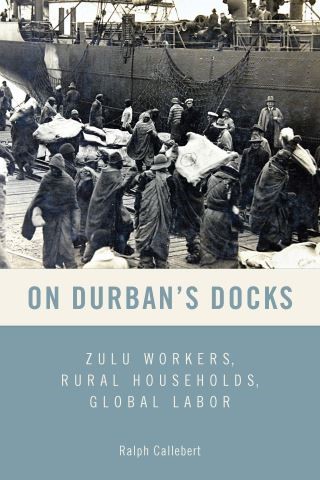 On Durban's Docks focuses on dock labor in early apartheid Durban, South Africa's main port city and a crucial node in the trade and communication networks of the Indian Ocean and the British Empire. Although the labor of Zulu migrant dock workers made global trade possible, they lived their lives largely in isolation, both socially and economically, from these global networks. Using seventy-seven oral histories and extensive archival research, Ralph Callebert examines the working and living conditions of Durban's dock workers and the livelihoods of their rural households. These households relied on a combination of wage labor, pilferage, informal trade, and the rural economy. Dock workers' experiences were thus more intricate than a focus on wage labor alone could capture. Foregrounding such multifaceted livelihoods, Callebert considers the dynamics of gender within dock workers' households as well as their complicated political identities, including their economic nationalism and fervent anti-Indian sentiments. On Durban's Docks thus offers a new approach to the study of labor on the subcontinent and globally, questioning the relevance of the predominant wage labor paradigm for Africa and for the Global South. Ralph Callebert teaches history at the University of Toronto.