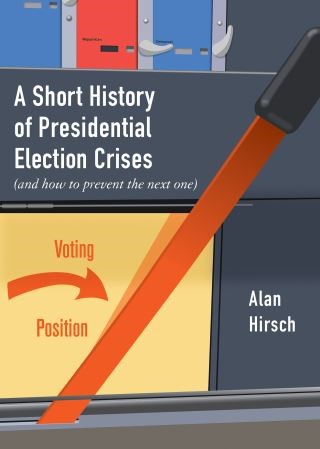 (And How to Prevent the Next One)

An urgent primer on what can be done to combat emerging threats to the core of U.S. democracy—presidential elections.

“Hirsch does a very good job of offering historical context to illuminate the present—and the terrifying future. His imaginative proposals are probably too sensible to be implemented in an age of parochial partisanship.”—David Shipler, former reporter for the New York Times and Pulitzer Prize winner

In 2000, we learned that an exceptionally close presidential election can produce chaos, because we have no reliable Constitutional mechanism for resolving disputes. Since 2016, we have learned that foreign countries—and perhaps other malevolent actors—have been covertly attacking U.S. election systems. In the age of hacking, our elections are more vulnerable than ever, and yet we have failed to adequately prepare for all possible scenarios. It is time for us to think about how we can prevent and/or deal with disaster before it strikes. In A Short History, Constitutional scholar Alan Hirsch addresses these issues with urgency and precision. He presents a concise history of presidential elections that resulted in crises and advocates clear, common-sense solutions, including abolishing the Electoral College and the creation of a permanent, non-partisan Presidential Election Review Board to prevent or remedy future crises.

"Democracy is broken, but as Alan Hirsch explains, it really doesn’t have to be. This is the real story of how our voting system became so vulnerable to attacks from within and without, told with precision, verve, and even hope. This is the way out."—Douglas Rushkoff, author of Team Human

"This is a must-read for anyone who cares about safeguarding presidential elections ―which should be everyone. Alan Hirsch illuminates and captivates as he unpacks our history of close and chaotic presidential elections occasioned by the Electoral College, and he masterfully develops the case for shifting to a national popular election. He then addresses contemporary technological threats to electoral legitimacy such as hacked elections or suppressed turnout, and offers a novel and provocative political (and, dare one say, nonpartisan) solution. The time to read this book and pay attention is now."—Evan Caminker, Professor and former Dean, University of Michigan Law School