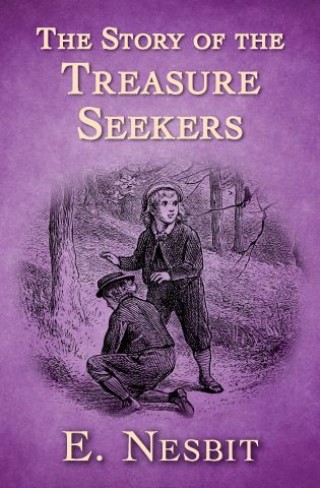 The Story of the Treasure Seekers

The Bastable children—Dora, Oswald, Dicky, Alice, Noel, and Horace Octavius—aren’t going to let their family’s trials and tribulations get them down. Banding together—with occasional breaks for fierce arguments—they’re determined to strike it rich to make up for their father’s recent business losses. How hard could that possibly be?

Funny and heartwarming, The Story of the Treasure Seekers has been a favorite for generations, inspiring two sequels starring the adventurous and mischievous Bastable siblings

“The children’s writer with whom I most identify . . . Oswald is such a very real narrator.” —J. K. Rowling

E. Nesbit:
E. Nesbit (1858–1924) began writing for young adults after a successful career
in magazines. Using her own unconventional childhood as a jumping-off point, she published novels that combined reality, fantasy, and humor. Expanded from a series of articles in the Strand Magazine, Five Children and It was published as a novel in 1902 and is the first in a trilogy that includes The Phoenix and the Carpet and The Story of the Amulet. Together with her husband, Nesbit was a founding member of the socialist Fabian Society, and her home became a hub for some of the greatest authors and thinkers of the time, including George Bernard Shaw and H. G. Wells.