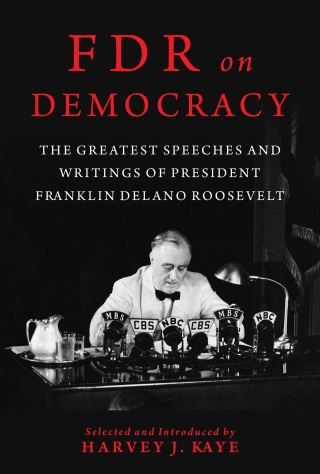 The Greatest Speeches and Writings of President Franklin Delano Roosevelt

From One of the Greatest Leaders in American History, a Collection of the Words and Writings that Inspired a Generation of Americans to Become the Greatest Generation

In just under three decades of public life, Franklin Delano Roosevelt rose to become one of the greatest orators and leaders in American history. As the longest-serving US president, he guided the nation through two of the greatest challenges of the twentieth century—the Great Depression of the 1930s and the Fascist threat of the 1940s—and radically transformed American public life. In doing so, FDR created the conditions that enabled Americans to make the United States stronger, more prosperous, and more democratic than ever before for generations to come.

Through his words—selected, annotated, and introduced here by writer and scholar Harvey J. Kaye—we rediscover the liberal and social-democratic vision and promise that FDR articulated so powerfully. We recall Roosevelt's efforts to redeem the challenge of the Declaration of Independence and renew the promise of equality and life, liberty, and the pursuit of happiness. We see him empower working people and make life more secure for more Americans. And we are reminded of his desire to not simply win the Second World War, but to create a nation and a world committed to the realization of the Four Freedoms—freedom of speech and worship, freedom from want and fear—indeed, to enact here in the United States a Second Bill of Rights, an Economic Bill of Rights for all Americans.

In this collection of his greatest writings and speeches, we encounter the words that inspired and encouraged Americans to remember who they were and what they were capable of accomplishing—the words that helped turn a generation of Americans into the Greatest Generation.

Now more than ever, we need to recall FDR's words. Now, when FDR's democratic legacy—the legacy of a generation—is under siege, we need to remind ourselves of who we are and what we need to do to make America freer, more equal, and more democratic.

Harvey J. Kaye: Harvey J. Kaye is Ben & Joyce Rosenberg Professor of Democracy and Justice Studies at the University of Wisconsin-Green Bay and the author of Thomas Paine and the Promise of America, The Fight for the Four Freedoms: What Made FDR and the Greatest Generation Truly Great,and Take Hold of Our History: Make America Radical Again. He lives in Green Bay, Wisconsin.