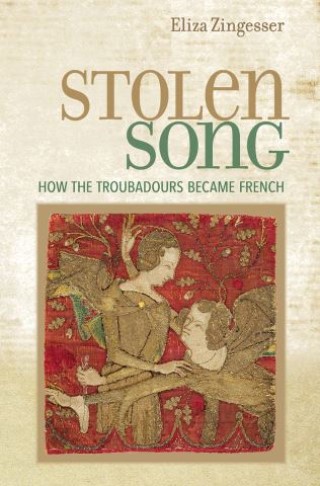 How the Troubadours Became French

Stolen Song documents the act of cultural appropriation that created a founding moment for French literary history: the rescripting and domestication of troubadour song, a prestige corpus in the European sphere, as French. This book also documents the simultaneous creation of an alternative point of origin for French literary history—a body of faux-archaic Occitanizing songs.

Most scholars would find the claim that troubadour poetry is the origin of French literature uncomplicated and uncontroversial. However, Stolen Song shows that the "Frenchness" of this tradition was invented, constructed, and confected by francophone medieval poets and compilers keen to devise their own literary history.

Stolen Song makes a major contribution to medieval studies both by exposing this act of cultural appropriation as the origin of the French canon and by elaborating a new approach to questions of political and cultural identity. Eliza Zingesser shows that these questions, usually addressed on the level of narrative and theme, can also be fruitfully approached through formal, linguistic, and manuscript-oriented tools.