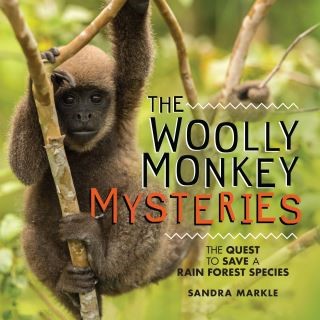 The Quest to Save a Rain Forest Species

In the cloud forests of the Amazon Basin, scientists are installing extraordinary numbers of camera traps in the hopes of learning more about an elusive species—woolly monkeys.

No one knows for sure how many woolly monkeys are left in the wild. But they play a key role in their ecosystem, and without them the rain forest is in trouble.

Join scientists on their quest to solve the mysteries surrounding the lives of woolly monkeys before it's too late.

Scan QR codes inside the book to see and hear the monkeys!

Sandra Markle is the author of numerous award-winning books for children. A former elementary science teacher, she is a nationally-known science education consultant.

Markle is also the author of the Insect World series and several single titles. Her book Rescues! was named a Best Book by the Society of School Librarians International and a Recommended Title of Outstanding Nonfiction by the National Council of Teachers of English’s (NCTE) Orbis Pictus Award committee; Animal Heroes was named a 2008 Lasting Connections title by Book Links.